My earlier work directly addressed the issue of sexual education leaving queer and pleasure-based topics out of the curriculum. My work currently is tackling the problematics in the idea that “seeing is believing”, which I think springs from my identity as a queer person. The avenues by which we reach identification and recognition of queer people are less “straight” than we would like to think.

Ernesto Renda attended the Brown-RISD Dual-Degree program and graduated with a BFA in Painting from the Rhode Island School of Design (‘18) and a BA in Modern Culture and Media Studies from Brown University (‘18). He has had solo exhibitions at The National Arts Club in New York, The Perry and Marty Granoff Center in Providence, RI and the Unitarian Church in Summit, NJ and his work has been in group exhibitions at The David Winton Bell Gallery, Yellow Peril Gallery, and the Gelman Gallery in Providence and ConArtist Collective in New York. His work is included in an upcoming two-person exhibition with Janie Korn curated by Matt Nasser at The Empty Circle Space in Brooklyn, NY. In 2018, he was the inaugural recipient of the Brown Arts Initiative Post-Baccalaureate Fellowship at the Performa Biennial in New York. He grew up in Somerset, NJ and currently lives and works in New York.

These pastel frottages (rubbings) are made with a relief of my fingerprint and other images, traced in twine. Much like the pixel structure of screens or the cross-hatching language of etchings, the fingerprint and other frottage patterns precede the image and the application of color and light.

There is the colorful image you see and the line drawing that you “see through”. The “Marcel Schein” works are named after my great-grandfather who studied cosmic ray physics in the 1940s. Cosmic rays are super-fast particles that enter the earth’s atmosphere and collide with air particles–scientists are still trying to figure out where they come from. They cannot be seen by the human eye, but they are constantly raining down on us and can cause computer errors.

I like the symmetry between the way a scientific phenomenon like this is discussed and the way many people practice spirituality–as a belief in that which exceeds the visible. The “Edgar Schein” works refer to my grandfather’s theory of organizational culture (also known as “corporate culture”). 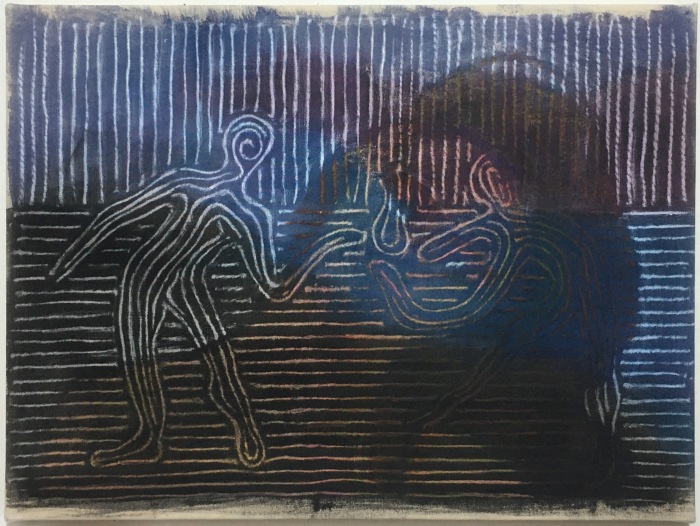 He uses the water lily as a metaphor for the cultural artifact which we encounter and the deeper root system and soil (which we cannot see) that bring it into being. These two bodies of work are the first two in my ongoing “Schein” cycle, where I explore the phenomenological and fantastical possibilities in three generations of my family members’ intellectual and academic work.

Hegel refers to Schein as the “shining forth of essence”. I think that each of these ideas bears on a certain phenomenology of seeing and holding space for the invisible. As a queer artist, I find it conceptually essential to put some pressure on what the politics and conditions of intelligibility and meaning-making are in figurative work, and the Schein cycle is my first foray into a more expanded and abstract notion of that project.